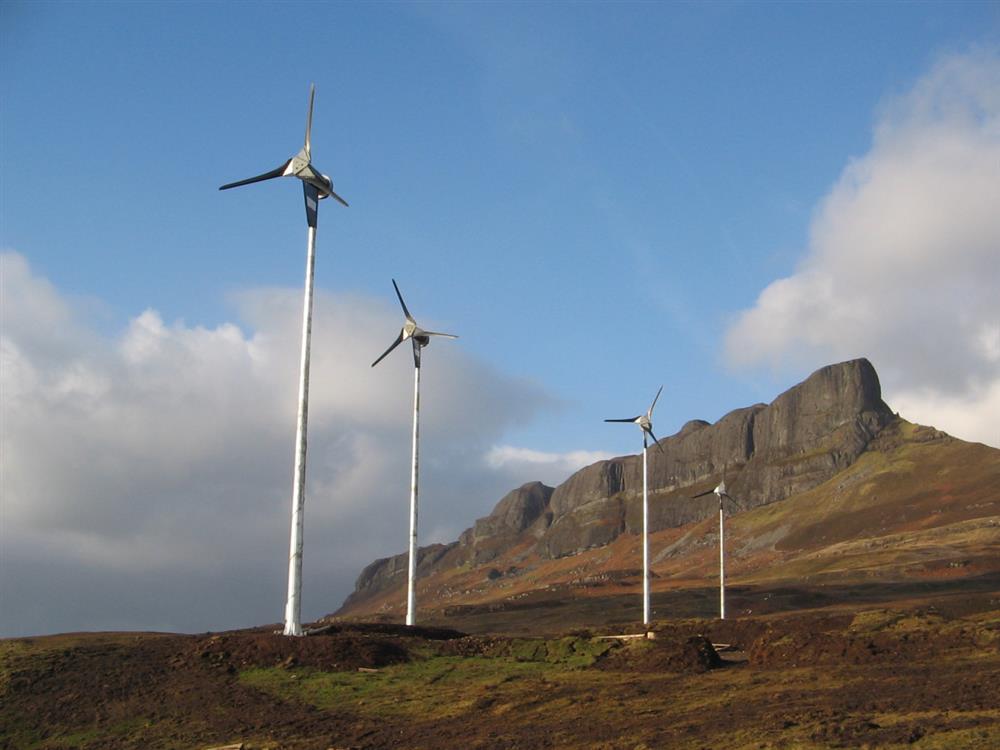 The Isle of Eigg was amongst the Pioneers of Small Scale Wind being utilised for the Electrification of Remote & Rural Communities. The Mini-Grid celebrated its 10th Anniversary this year after originally being commissioned in 2008.

Continuous power was made available for the first time to all residents and businesses on the island in  2008. Until then, they were dependent on costly and inefficient diesel generators.

4 x small scale (SD6) wind turbines (6kW each) from SD Wind Energy  were used as one of the primary energy sources in the hybrid system, which also consists of Solar PV,a Hydro scheme and Battery Storage. The mini-grid system is entirely stand-alone and has no external input from a mainland utility. The system was designed and commissioned by leading off-grid renewable energy supplier - Wind & Sun.

The SD6 wind turbine was selected as the best choice of small wind turbine due to its low servicing requirement, low cost of ownership, ease of installation and ability to withstand extreme wind conditions which regularly affect the region.

SD’s Managing Director – Richard Caldow commented “The electrification of Eigg is a great example of how the local community can engage with specialist suppliers of renewable energy. This project was one we were very proud of back in 2008 and we are even more proud today that the hybrid system with our small wind turbines has helped the remote community prosper, expand in population and become an award-winning example that can easily be replicated across the globe.”

The SD wind turbines do not require to switch off in high winds which makes them perfect for areas affected by high winds and climatic weather regimes. The turbines are also manufactured for both hot and cold climates and can also be supplied in varying voltages to allow them to be interconnected to existing mini-grids or become the core technology in newly designed mini-grids.

Mr Caldow added “We have been designing and installing small scale wind turbines for off-grid and mini-grid developments for over 25 years. We understand the value in providing sustainable power in remote areas. The Eigg installation has been referenced so many times as a great example, so much so that it was visited by a delegation from Malawi and more recently has been replicated on the Island of Canna where we are again working with Wind & Sun on the commissioning a new mini-grid  with 6 of our SD6 wind turbines.”

SD Wind Energy can provide full turnkey mini-grid systems or supply small wind turbines for mini-grid projects either already designed or commissioned. The introduction of small wind as an additional technology is proving very popular for the many community mini-grids already in operation around the world.

To find out more and to talk to a member of our team: